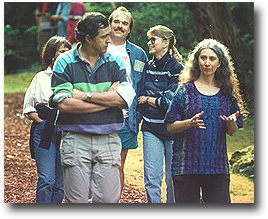 The Evolutionary History of Music website is one of series sponsored by the Institute for Creative Development and reflecting its work.  ICD is a non-profit, non-partisan think tank and center for advanced leadership training dedicated to clarifying and supporting the kind of understanding and leadership a vital future will require.  From 1984 through 2002 it existed as a Seattle-based “bricks and mortar” institution.  Today its work is web-based and worldwide.  (The Institute’s home website can be found at www.creativesystems.org.)The Institute’s efforts are coordinated by psychiatrist, author, and futurist Charles M. Johnston, MD and the larger portion of its work is drawn from his thinking.  Dr. Johnston is author of numerous books on the future of what it asks of us.

An Evolutionary History of Music—Overview

Once each year during the Institute’s “bricks and mortar” life, Dr. Johnston did a day-long presentation using the history of music and movement to bring insight to how culture, and human systems more generally, creatively evolve. The last presentation was taped and is available here. It is significant because of how powerfully it applies non-rational intelligences to making sense of change dynamics. It is significant also for its contribution to our understanding of music and music’s creative functioning in culture.

This historical interpretation of musical esthetic and structure is based on the thinking of Creative Systems Theory, a comprehensive framework for understanding change and interrelationship in human systems developed by Dr. Johnston and colleagues as the Institute. The central thesis of Creative Systems Theory is that we toolmaking, meaning-making creatures comprehend our worlds not just rationally, but through what is ultimately a “creative” lens. As part of this, we see our worlds differently depending on when and where developmentally (when and where in pertinent formative processes—including the evolution of culture)  we encounter it.  The following link to the Cultural Maturity Blog Library briefly outlines how creative patterning works and how it relates to cultural change (see Cultural Evolution: Patterning in Time). Those with interest in a more extensive look at CST are referred to the CST web site (CSTHome.org).

Music, because it draws on more germinally creative sensibilities than the usual language of theory provides a particularly rich entry point into Creative Systems Theory’s perspective. Indeed much of the theory’s early thinking derived from observations of evolutionary patterns across culture in both the structures and the cultural functions of musical expression. The section that follows the Evolutionary History of Music Presentation addresses a variety of topics pertinent to music’s role in human experience and the particular insights it provides into the human endeavor more generally.

The Evolutionary History of Music Presentation

View the Evolutionary History of Music videos below.

Contact with music from other cultures had an important role in the early development of CST. As a medical student at the University of Washington, Dr. Johnston ventured “upper compass” to take classes with Dr. Robert Garfias in the department of ethnomusicology. The U of W program was one of the first and taking part in Dr. Garfias’s classes was a heady experience. It meant every day hearing music wholly new to his ears (and not newly created but with deep historical roots) in spite of him being someone with a strong music background.

One of the things that most struck him was how music from similar stages in culture (as he was beginning to think of them) had powerful parallels no matter where on the planet it came from. As recounted in the video, some of patterns noted could be thought of as sociological (such as a tendency for music to move from an activity in which everyone took part to an activity primarily for professionals). Others are more musicological (such as a general progression from music that is more rhythm dominant to expression that is more melodically dominant and from music that is more modal to the cleaner distinction of major and minor). But the most important are more systemic (in the CST whole-person, whole-body sense). Hearing music from any cultural time required one to “hold experience” in a particular way, to make a particular kind of internal space for it. It is this that Dr. Johnston draws on with the Evolutionary History of Music presentation. He invites participants to “step into” the experiential world required to hear (or see, or dance) each cultural stage’s esthetic expression. There is a place in oneself from which each stage’s music shifts from being simple noise (and often disagreeable noise) to something deeply resonant. In the Evolutionary History of music, Dr. Johnston uses music—and finding that internal systemic place where a cultural time’s music becomes music—to help participants embody and appreciate the unique experiential realities of different cultural stages.

One of the most important insights in the development of CST happened specifically in these classes. This is the important relationship between Patterning in Time and Patterning in Space discernments (between developmental processes as creatively framed and more here-and-now systemic relationships—see CSThome,org). Dr. Johnston noted marked differences in how various students in the room reacted to the same music. Some on hearing a particular piece of music—wholly new to their ears—might respond with a deep connection, almost familiarity (a “come home to mama” response as he puts it). Others on hearing the same piece might find it only noise, or worse, aversive like fingernails on a blackboard. Another piece of music, generally from a different cultural stage, would evoke a similarly disparate response, but the “come home to mama” and “fingernails on a blackboard” groups would be made up of different people.

With his fascination for personality differences that grew from his work in psychology and psychiatry, Dr. Johnston began looking for patterns in these fascinatingly different responses. It is here that he developed the insight, key to the Creative Systems Personality Typology, that temperament differences reflect the way different people preferentially embody different parts of the “Creative Whole” (to use CST language). Some people contribute most from the more germinal, “inspiration” parts of the creative mechanisms. others from more concrete, “perspiration stage” sensibilities, and others from more manifest, “finishing and polishing” gifts and concomitant worldviews. (See the Creative Systems Theory Personality Style web site, CSPTHome.org, for a look at this approach to thinking about temperament.)